Making of a Monster: Ed Gein

Pick Me Up! magazine asked for my professional opinion on Ed Gein, an American murderer and body snatcher, in their regular column ‘Making of a Monster.’  Out in the 17th May 2012 edition.  I supplied the following psychological insight. 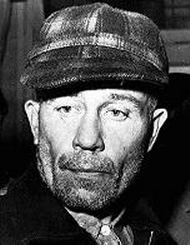 How would you describe the relationship between Ed and his mum? What was the bond between them and how did it impact upon the rest of Ed’s life?

Ed Gein’s relationship with his mother was the inspiration for the well-known relationship in Hitchcock’s ‘Psycho’ between Norman Bates and his mother.  There is no question that Ed had an unhealthy attachment to his mother.  He worshipped her, referred to her as a “saint,” and after her death spent his time trying to get closer to her.  His mother, Augusta, was far from a saint, and has actually been described by others as dominating and abusive.  With this in mind, it is possible that Ed developed an angelic perception of his mother in order to cope with the abuse.  There is also some evidence that Augusta brainwashed Ed through frequently claiming that all women, with the exception of herself, were evil.  The bond Ed developed with his mother as a child literally controlled the rest of his life, with his home becoming a shrine to her.

How would the young Ed have reacted to his mum’s strict religious code and her insistence upon isolating her children from outside influences?

Young children are like sponges and it is likely that Ed absorbed everything his mother conveyed to him through her strict religious code.  Furthermore, by isolating her children from the outside world, Ed was given the message that the world was a dangerous place and she was protecting him from it.  This would have acted to exacerbate Ed’s image of her as a “saint.”  Young children do not tend to question what their caregivers do or say, but accept that what they are doing is within their best interest.

How was his sexuality shaped by his relationship with his mum?

Ed was so attached to his mother that he did not know where she ended and he begun.  He could only relate to himself via his mother, so once she was gone he had a need to try and revive himself.  This manifested through collecting parts of dead bodies that reminded him of his mother, as well as wanting a sex change – anything to be closer to his mother, and thus closer to himself.  Without his mother around, Ed lost his identity.

What impact did his mum’s death have upon him? Can his mum and her death be at the heart of his crimes?

Ed’s childhood and the messages about women and life in general conveyed to him by his mother had already laid the foundations for the making of a monster.  However, would Ed have committed these crimes if his mother was still alive?  Probably not.  His crimes were efforts to be closer to his mother and thus Ed’s crimes were like a bomb waiting to go off, which occurred when his mother died.  Grief is incredibly difficult to deal with for psychological healthy people.  Ed was out of his depth with his grief and had been isolated for so long that he was on his own with these overwhelming feelings.

How are we to understand Ed’s claims he wanted to change sex? What was his interest in the female body?

Why would someone use human remains to make household items like Ed?

Ed’s world had been his mother.  Now his world was his mother’s house.  He wanted every part of it to be a reminder of his mother and the only way his damaged mind could achieve this was by using the dead remains of females. Someone less isolated might have found a mother figure in someone else; Ed could not do this.

Ed claims not to remember killing Beatrice Worden or Mary Hogan. He said he was in a ‘dazed state’ when he committed the murder. Why should this be? Can such acts be blocked out by the mind?

It is possible that Ed was in a ‘dazed state’ when he committed murder and, indeed, such acts can be blocked out by the mind.  Whether this is the case with Ed remains unknown, but given the infrequency of the murders (one in 1954 and another in 1957), it is possible.  Indeed, as far as serial killers go, Ed had no clear pattern in terms of the murders.

He was a model prison inmate, and actually seemed happy to be incarcerated. Why should this be?

A prison inmate was exactly what Ed was to his mother.  By being incarcerated, Ed is again in familiar territory, with very strict rules and regulations.  Ed’s early childhood experiences in many ways conditioned him to feel much more comfortable in an institutionalised setting than in a position of independence and free will.  Just look what happened the only time he did have independence and free will, during the time between his mother’s death and being incarcerated?!